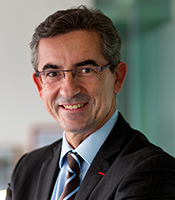 In 1996, he moved to the French tax department as Head of Strategy and Controlling before being appointed Head of Information Systems and Strategy.

Between 2000 and 2002, he was appointed CIO, head of the nation-wide “Copernicus program”, aimed at rebuilding entirely the French tax information systems and creating a multi-channel, service-oriented e-tax administration.

In 2007, Gilles Grapinet joined the Executive Committee of the international banking Group Credit Agricole SA, where he was Head of Strategy before being appointed CEO of the Payment Systems & Services business division.

He joined Atos from December 2008 as Senior Executive Vice-President, in charge of Global Functions, Global Sales, Consulting and Worldline until 2013.

Since July 2013, in addition of his position in Atos, he was appointed Worldline Chief Executive Officer, and has led the successful partial listing of this former subsidiary of the Atos Group with a market capitalization of c. € 2B in June 2014. Worldline has since executed an ambitious development with the successful acquisitions of Equens in 2016, SIX Payment Services in 2018 and Ingenico in 2020.

Worldline became fully independent from Atos on May 3rd, 2019, is now n°1 electronic payment services provider in Europe and n°4 globally, and since March 2020 part of the CAC40 leading French index with a market capitalization of c.21B€ (March 2021).

M. Grapinet is also member of the French order of “Légion d’honneur” (knight).