EU27 leaders – after a marathon Council summit of Heads of state and government – agreed a deal on the next multiannual financial framework (long-term budget) of the EU as well as on the Covid-19 “Next Generation EU” recovery fund that had been proposed by the European Commission (EC). The structure of the final deal is attached.

Under the terms of the deal, EU member states agreed to the issuance – by the EC – of an unprecedented EUR 750 billion in common EU debt to finance the recovery for the 2021-23 period (reimbursable by 2058). The overall amount is split into EUR 390 billion that will be disbursed in the form of grants and EUR 360 billion in the form of loans. Above that sits the EUR 1.07 trillion long-term EU budget for the period 2021-2027.

It is important to note that although the size of the grants portion in the recovery fund was reduced after fierce negotiations over the weekend from the initially proposed figure of EUR 500 billion, the creation of this facility still marks a significant step in the direction of fiscal union for the EU.

Of further significance is an agreement by EU leaders to allow the EC to raise own resources to service the commonly issued debt. The text references in this context a Carbon Border Adjustment Mechanism (CBAM) and a digital levy (both for application by 1 January 2023) as well as the extension of the emissions trading system (ETS) to the maritime and aviation sectors, and a Financial Transaction Tax (FTT). Noteworthy in this regard, however, is that any legislative proposals in this context would fall into the area of taxation and would require unanimous approval by all member states.

Structure of the Next Generation EU recovery facility: 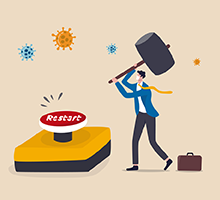