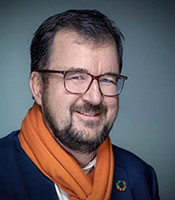 CEO and founder, Blue like an Orange Sustainable Capital

I am CEO and Founder of Blue like an Orange Sustainable Capital, an investment fund with the objective to deliver market level financial returns whilst at the same time achieve credible, sustainable development outcomes.

Previously, I was Managing Director and World Bank Group Chief Financial Officer where I led a number of the most important reforms that the group undertook and also represented the group in various international forums, such as the G20 and Financial Stability Board. Prior to joining the World Bank Group, I was the group chief financial officer at Société Générale and before that at Crédit Agricole, two of the world’s leading financial institutions; I helped navigate both banks through the financial crisis.  Before joining Crédit Agricole, I was a managing director of Lazard in Paris and was responsible for the Financial Services Group.

In 2003, I was invited to join France’s President Jacques Chirac's diplomatic team and was closely involved in the preparation of the G8 summit in Evian, France.  In that capacity, I served as the President's deputy personal representative for Africa and as a spokesman for the working group on new international financial contributions to fight poverty and fund development, which produced the Landau Report. In 2002, I was a member of the World Panel on Financing Water Infrastructure chaired by Michel Camdessus, the former Managing Director of the IMF.

Prior to joining Lazard, I served in France’s Ministry of Finance where I led a number of control, audit and consultancy missions for the French National Audit Office. I began his career in 1989 as assistant group controller for BFI-IBEXSA, a Franco-American company that is now part of Avnet.

I have served as director on a number of boards, including the supervisory board of private equity firm Eurazeo, manufacturing company Haulotte Group, various boards of the leading French regional daily newspaper group Ouest France and represented Crédit Agricole and Sociéte Générale on the boards of a number of their subsidiaries.

I chair the Audit Committee of the FIA (International Automobile Fédération - chaired by Jean Todt) and of Wealthsimple (leading Canadian fin tech sponsored by PowerCorp) and I am a board Member of GETLINK (EUROTUNNEL) and of Liquidnet (New York). I am also the senior advisor of JAB Holdings, one of the worlds leading consumer goods company for ESG and Sustainability.

I have taught in a number of schools and universities and published several books. The last one « Can finance save the world? » deals with the future of finance in light of the global financial crisis and the sustainable development agenda. With forewords from French President Macron and former British Prime Minister Gordon Brown.